Lumify Eye Drops Review: Are They Worth Purchasing?

​Red eyes plague a surprisingly large number of people. Often associated with those who are high or overtired, this stigma can be harmful to those who naturally have bloodshot or red eyes. Unfortunately, people judge us largely on our appearance and therefore there is an enormous incentive for sufferers to find a solution to this redness.

One of the tactics is the utilization of an eyedrop. The idea is that by wetting the eye, you can prevent dryness which is thought to cause the irritation which can lead to bloodshot looking eyes. However, with recent improvements in science, we can do far more than purify and moisturize the ball itself.

Lumify has the recommendation of many leading experts, including countless customers who are happy with the results that they are getting. But does it live up to the hype? In this Lumify eye drops review, we’ll be examining the science and removing the rubbish so that you can get an objective idea of what Lumify is capable of and why it might work.

What Is Lumify Eye Drops and How Does It Work?

Arguably the most well-known brand in the industry, Lumify has sold hundreds of thousands, if not millions, of bottles of their eye drops. They claim that it not only reduce redness but can enhance the white of your eye, drawing attention to your pupils and making you look beautiful. Plus, they claim to be able to do this without any dye or coloring.

The active ingredient in the recipe is brimonidine, which is approved by the FDA for the treatment of glaucoma. Although, it’s worth pointing out that the levels of brimonidine in glaucoma drugs are significantly higher than what it in Lumify, hence the relatively mild improvement in comparison.

The difference is the tetrahydrozoline, which is in Visine, works on the arteries which are delivering blood to your eye. While brimonidine impacts the veins which are taking blood away from your eyes and back into your heart to be pumped around your body again. Why does this make a difference?

Well, there is a common problem known as the rebound effect. When you constrict blood vessels the oxygen and blood to the eyes is reduced. To compensate, you arteries try to pump more blood than before. As a result, once the drug wears-off you can experience work redness than before you used the drops.

Therefore, people can become dependent on eye drops; otherwise, they will experience intense bloodshot eyes. The difference is that Visine works on the arteries, causing a bigger rebound effect than Lumify which only constricts the veins. For this reason, many people prefer to use Lumify to reduce redness as drug wears-off.

It’s also worth looking into the FDA study that was done to ensure the safety of this drug. The trial only lasted five weeks, and therefore there is some concern about the long-term safety of extended use of Lumify. Doctors recommend that for occasional use it’s likely to be safe, but possibly not for long periods.

It also contains benzalkonium chloride, a preservative which is known to cause irritation and reactions for some people. Therefore, you might consider talking to your eye doctor before you start using Lumify or any other eye drop.

Likewise, Lumify isn’t going to solve redness; it only masks it. If you experience extreme bloodshot eyes, you should see an eye doctor see if there is a reason for the symptoms. It’s possible that they will be able to treat it or give you prescription medication to reduce the problem, not just the symptoms. 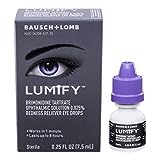 Lumify is different from other eye drops because it uses a drug which constricts the blood flow of the veins. Many drops only at liquid to the eye to prevent dryness, while others like Visine will constrict the arteries, which can lead to greater redness when the drop dries out. The biggest benefits of using Lumify are:

Otherwise, it’s applied similarly to other drops and therefore isn’t particularly unique. It is FDA regulated, which is a good step, but this stamp of approval is something you should take with a grain of salt. FDA approval is the minimum for selling these consumer products and therefore doesn’t necessarily mean it’s safe for everyone, for long periods.

Due to its method of action, Lumify can work for up to eight hours although most people will probably need to reapply in a little over half this time. When compared to cheaper and inferior drops, this period is relatively long although it’s probably not wise to use Lumify all-day, every day for long periods due to it not having extended testing.

Ideally, you would use Lumify when you have special events or an important meeting. Using it at work when you’re hammering away at your keyboard, not talking to anybody, isn’t the smartest decision. By limiting your usage, you can protect your eyes from any potential damage and amplify the benefit for when you do choose to use it. 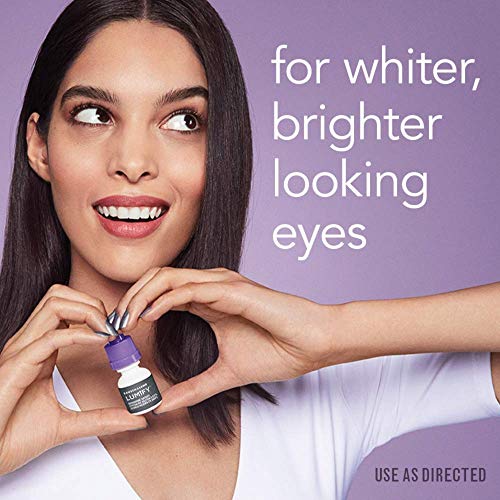 At the time of writing, Lumify comes in two different sizes, 0.08 and 0.25 ounces. Depending on how much you plan to use, you can also create a monthly subscription through Amazon which can save you a significant amount of money.

Likewise, you can save yourself an additional 5 percent if you agree to a regular shipment. If you do this for multiple products on Amazon, you can get 15 percent off the entire shipment which can save you an enormous amount of money each month. Plus, with Amazon Prime, you can get a free one or two-day shipping within the United States.

When compared to Visine, the price is very high. Visine is for about an eighth of the cost, which means that Lumify is incredibly expensive, by all measures. However, for those with severe redness and a fear of a rebound effect, it might be worth it. On the other hand, you might be wiser to try Visine first to save money if you find that it doesn’t work correctly.

According to the extensive research that we performed, the customers love Lumify. Of course, there are some for whom it doesn’t work, particularly those who appear to be irritated by the preservative that’s within the formula. But for the majority of customers, they experience a marked improvement within a couple of minutes or less.

This effect has been found to last for many hours, with some only treating their eyes once per day. For these users, it has been incredibly effective, with photos showing bloodshot eyeballs becoming creamy white within a minute. The active ingredient is very potent and effective and constricting the veins to reduce redness.

During our research, we were surprised at how loyal and happy customers were with the brand. The problem is painful to these users self-confidence, and the drops gave them a marked improvement in mood and confidence. For this reason alone, it’s hard to recommend against trying Lumify for those who are struggling with this condition.

When reading negative reviews, one thing that stands out is a disliking of the main active ingredient. For those with circadian or heart problems, or those who are using MAO inhibitors for depression, constricting blood flow can be problematic. Truly, if you have any doubts, it’s wise to speak to a specialist eye doctor before you use Lumify.

Another surprising fact was that customers repeatedly mentioned how they felt that Lumify was good value for money, despite being very expensive. The problem of redness is such an issue for customers that they are willing to pay this much, and more, to solve their problems. Truly, the price isn’t an issue for the users of Lumify.

This fact surprised us, because of how much pricier it is than Visine. However, this can only suggest that the difference in effect is so large that they increased cost is easily justifiable. For this reason, we’re less concerned about the value for money that Lumify offers than we would usually be because clients keep coming back for more.

How It Compares and What We Think

When compared to non-brand drops and others which primarily attempt to reduce irritation by adding moisture to the eye, Lumify is far better. By including an active ingredient to reduce blood flow, it massively reduces the appearance of redness on the eyeball and should last for many hours. On the other hand, moisturizing drops last for a short period.

The most significant comparison is with Visine. Both use similar active compounds which have almost identical operations, leading to the same result. The major difference is with the rebound effect, where Lumify has a notable edge because it doesn’t cause the same redness to appear after the drops wear-off and stop working.

For this reason, we think that Lumify has a considerable advantage when it comes to performance. If you care primarily about reducing redness, at all costs, Lumify is worth giving a try, despite the high price.

While we’re on the subject of price, you can’t overlook the fact that Visine is a tiny fraction of the cost of Lumify. If you’re on a budget and can’t afford to spend a vast amount, skip Lumify. The rebound effect is often over exaggerated and not a huge issue if you only use the drops sparingly and in essential situations which don’t last all day.

For this reason, we think that Visine offers better bang for your buck. However, Lumify is a better product when it comes to getting results. Other differences between the two brands are very negligible. If one doesn’t work for you, try the other. But for most people, the decision should be primarily based on budget and severity.

If you prioritize money, go for Visine. If you can afford to spend more to get better results, pick Lumify. Overcomplicating the decision beyond this level is necessary for the vast majority of consumers because they work in nearly identical manners.

The exception to this rule would be for people who are allergic to certain compounds or ingredients. Make sure to read the ingredients list on each and ensure that it won’t interfere with other medications that you’re taking by always speaking to your doctor before using a new product.

After reading hundreds of reviews, it’s hard to tell a difference between the two items. Some will claim that one works better than the other, while a separate group of customers claims the opposite. Likewise, you might find Visine irritates you while another person gets increased redness from Lumify.

One solution would be to buy a bottle of each and test them yourself. We are all individual, and it’s likely that works for one person might not for another. They are both relatively inexpensive, especially if you buy the smallest bottles to try. After, you can figure out if Lumify is worth the extra cost in your opinion or not.

For us, we would tend to lean towards trying Visine first because it’s so affordable. If you find that the rebound effect is pronounced and frustrating for you, swap to Lumify and test to see if you have an improved reaction to its ingredients. The science we read suggests that this will be the case for the majority of users with serious bloodshot eyes and redness.

Again, it’s worth visiting your eye doctor. They may be able to identify a specific cause for the redness, which can be fixed rather than masked with these drops. On the flip side, they might suggest a specific eye drop for you, as many optometrists do, based on your medical history and other medications that you are taking.