How to Manage Anterior Blepharitis

Have you ever experienced having your eyelids stuck together?

How about having itchy and greasy eyelashes? Are the margins of your eyelids swollen?

Are you sensitive to bright flashes of light? Are you feeling a burning sensation in your eyes?

Is your vision getting blurrier and at the same time your eyes and your eyelids are getting redder and redder by the day?

Then you might be suffering from a condition called blepharitis.

Blepharitis is the inflammation of the eyelid margin, which is basically the place where your eyelids end.

Due to its frequent use, the damage to the eyelid margin leads to a lot of complications, like having dry eye, acne rosacea, an infestation of mites and, in rare cases, sight damage or even blindness.

One thing that you need to know about blepharitis is that it is, in a sense, incurable. It will stay for the rest of your life. However, blepharitis can be contained and controlled if you take care of your eyes, especially your eyelids, much more carefully than before.

Blepharitis can affect everyone young and old whichever demographic, gender, or race.

Blepharitis can be categorized as acute or chronic. It is best treated using a combination of antibiotic and corticosteroid or just the corticosteroid alone. If the condition is severe, doctors may prescribe oral medications such as doxycycline (for adults) or erythromycin (for children).

Anterior Blepharitis is Not Infectious

You do not need to confine someone suffering from anterior blepharitis, however, the patient should take care of their eyes better.

Also, this type of blepharitis is very broad. Thus, the blepharitis that you are suffering from may not be as serious as you think.

Most of the cases about blepharitis show that there are long periods of time between the symptoms to show up. And most of the times, if the hygiene and self-care of the patient improves, the symptoms are not as serious as before. 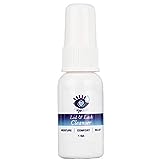 Since blepharitis is not curable, it can be managed as if you do not have it.

What is important to know is that irritants like cosmetics should be avoided. Just look at blepharitis images on the net. You may see quite a lot of swollen or crusty eyelids, but after treatment, you will notice considerable improvement.

What you can do is to use a warm compress, microwave for 15 seconds and lay it gently to your closed eyelids. Try to do this 10 minutes every day, preferably before you go to sleep or after you wake up.

You can massage the eyelids so that the oil glands express and will function properly. Eye doctors would also recommend using a hypochlorous acid eyelid cleanser, to help manage your blepharitis.

Think of using this hypochlorous acid eyelid cleanser to prevent and maintain blepharitis, just like brushing your teeth to prevent cavities.

Blepharitis, especially anterior blepharitis, can be managed. You just need to have more discipline in taking care of your eyes.